The goal is almost exactly the name, infant immunization. The WHO strives to incorporate the positives of routine vaccinations into the early health and development of children. One of the flaws of having developed a means to help prevent these childhood diseases is that no one remembers how devastating they could be. In 1920, only 68% of children in the world made it to age 5. That was less than a hundred years ago. Last year that number was at roughly 99.5% in the United States.

There has been some argument that administering so many vaccines, usually 3 or 4 at the same time, overloads the child’s immune system. That has been proven to be false, as they have new immune system. Everyday their immune systems fight off millions of disease causing agents. These vaccines introduce the body to damaged or dead diseases that would otherwise cause harm if they interacted with the live strains.

One example of what mass vaccination has prevented is Polio. There has not been a case of polio that originated in the country since 1979. Every year it would cause several thousand deaths, in addition to paralyzing,blinding or causing damage to the nervous system for tens of thousands every year. Based on historical data, we need an absolute minimum of 86% of the population vaccinated in order to prevent the spread of polio.  You would think that it would be closer to 100% than the minimum, but in 2012 only 92% of the population vaccinated.

There are many examples that prove that vaccinations help prevent epidemics, so why take the risk of not vaccinating?

There are approximately 3.5 million people living with autism in the United States, affecting about 1 in every 68 births. The rate in 2004 was roughly 1 in every 125 births, showing that the occurrence rate has doubled since then. As more and more American families are being affected, the nation has to decide how to best service these families and their needs.

Autism Awareness Month hopes to increase the 4 A’s and an I of Autism; Awareness, Action, Acceptance, Appreciation and Inclusion. One of the driving reasons for wanting these five things is to make them feel human and a part of society. This is important, because legislation that affects their lives is being written right now by people that don’t know much about this disorder. They don’t have the proper background to make informed decisions, which this month is trying to change.

The symptoms of autism usually become prominent in ages 2 to 6 years. The National Institute of Child Health and Human Development (NICHD) has five behaviors that parents should watch for and use as indicators for further evaluation.

Having even 1 or 2 of these symptoms is not a diagnosis. You need to bring your child to a panel of specialists that know more about the disorder and how to diagnose it. These are just behaviors that suggest you should do this.

There is for no for certain cause for autism at the moment. The main things that are thought to play apart in the development in autism are genetics, epigenetics (gene folding due to a shifting environment) or a possible comorbidity with other genetic diseases. It used to be thought that it developed after a traumatic event in their childhood, but that has been disproven. It is also currently thought that certain immunizations cause autism to develop, but numerous epidemiological studies have disproved that belief.

MSUM is having an Autism Documentary and Panel night on campus to help raise awareness. It will be in Langseth 104 at 7pm this Monday April 7th. They will be a film followed by a panel for any questions.

One way that you can show your support for this month is by wearing the unrecognizable puzzle ribbon. The Autism Society sells the ribbons here and the proceeds go towards research and aid. If someone approaches you, don’t turn them away. Take this moment to educate them. If you are unsure of something, say so instead of spreading false information. 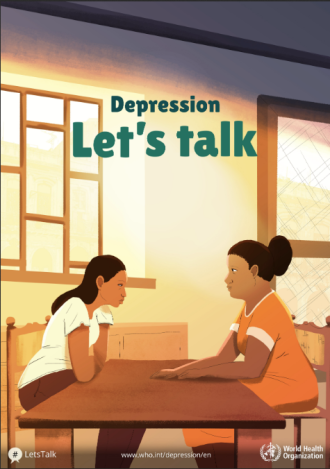 Every year on April 7th we celebrate World Health Day to remember the day that the World Health Organization was formed. (W.H.O.) Every year this day has a theme, and this year it’s Depression. Their slogan “Depression: Let’s Talk”  is trying to get people to open up about their disorder and get the help they may need. They have several goals about what they want to see happen:

WHO defines a case of depression when a person has gone at least 2 weeks with persistent sadness and they don’t enjoy doing any of their normal activities, which prevents them from carrying out every day activities. There are a few more symptoms that people who are afflicted by depression may have:

The number of people that have being diagnosed every year with depression has seen an 18% increase in the last decade. The low estimates have depression affecting 322 million people worldwide, about 4.4% of the population.

Depression can be effectively prevented and treated. Treatment usually involves either a talking therapy or antidepressant medication or a combination of these. Overcoming the stigma often associated with depression will lead to more people getting help.